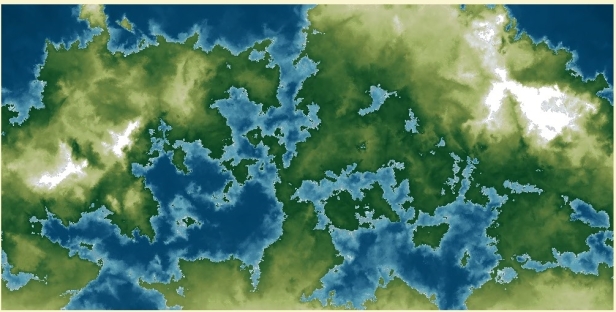 Worlds are pretty important to a story. For most of us, it’s pretty easy because there’s a world already existing for us to set our stories in: Earth. Just pull it out of the box and it’s loaded up with plenty of interesting time periods, cultures, natural wonders, natural mediocrities, technological wonders and technological disasters to write about. It’s also, conveniently, perfectly internally consistent as a setting, seeing as everything in it already happened.

Unless, of course, you’re writing about the future. But you’ve still got a helping hand. All you have to do is look at a culture and extrapolate it forward through a few hundred or thousand years of technological/fantastical progress (or regression). Plus you can do stuff like name space battleships and McGuffins after historical Earthy words like “Nebuchadnezzar” (The Matrix) or “Dead Sea Scrolls” or “Chamber of Guf”  (Neon Genesis Evangelion). Very cool.

But what if you want to write about something that didn’t happen? Not a story of a vaguely European farmer boy who cried a lot about wolves and learned a valuable lesson, but of two empires that never existed clashing over historical events that never happened? Ah, can’t quite sneak that one past the historical pedants in your audience, can you.

In that case you need to create your own world. That sucks, huh. So, the first step. You do need a canvas to start painting on: geography. Now, the leading minds over in whatever nerd-haven your initial volley of Google searches hit upon would probably have you believe that you need to start modeling mounds of molten earth cooling around blazing balls of gas, then start predicting which mountains and flood plains would exist based on the rotation of the planet and its distance from the sun and the tectonic plate activity and yawwwwwnnnn.

That’s too much work. If you’re like me, your goal is most likely to get to the point where your story has a setting at least a few chapters before the characters get there. Having to lean out and frantically lay down tracks before your train of plot derails is too little worldbuilding. Being able to break into an orphanage and Truman Show an unsuspecting kid in your fantasy is probably too much if you want this story to get written in any reasonable amount of time.

There’s plenty of tools out there to automate this process. The chunk of land attached to this post is one such randomly generated hunks of dirt and sea. Some google buzzwords you can use are “fractal” “world” “planet” “generator” “map”.

On a side note, this hunk of dirt is called Vyaden, a name I’m sure my regular readers will be completely unfamiliar with, because there’s no real reason for any of my characters to have ever mentioned it.

Next, I’ll go into the first part of the worldbuilding process that requires a little work. Making up the people who live on your hunk of dirt.

One thought on “Worldbuilding Vyaden #1: From Scratch?”

Who we are, what we wrote

All content copyright by the authors unless otherwise attributed. All rights reserved.